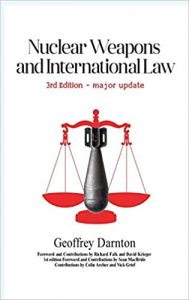 Are nuclear weapons legal or illegal under international law? This book aims to put in your hands information about all the main legal arguments you are likely to encounter. This question has been addressed by several quasi-legal independent tribunals, such as the London Nuclear Warfare Tribunal and Australia Tribunal. The question has been handled also by the International Court of Justice (ICJ) which delivered Advisory Opinions. The key Advisory Opinion is included in this book, along with the more substantial Opinion of the ICJ Judge Weeramantry. Recent and current developments include discussion of the Trident Three case in Scotland along with the Lord Advocate s Reference, and the case in the ICJ of the Republic of the Marshall Islands (RMI) v UK. A copy of the application in the RMI v UK case is included, The book concludes that the overwhelming balance of opinion (judicial and legal expert) is that the possession, threat to use, or use of nuclear weapons in any circumstances whatsoever is unlawful in international law and that individuals involved in decisions to develop, finance, acquire, or deploy nuclear weapons can be held accountable as individuals under international law. An associated overwhelming conclusion is that the nuclear weapons states are in breach of their obligations under the Non-Proliferation Treaty and other international legal agreements. The book explores the role and legal significance of civil society and related activism such as the profound influence it had via initiatives like the World Court Project that succeeded in persuading the UN General Assembly to refer the question to the ICJ. The book mentions several civil society initiatives current today. There is a history of the International Peace Bureay, the world’s oldest peace organization that has had a profound influence on the evolution of international law related to warfare (and it has had 13 Nobel Pdeace Prize Laureate associates. New chapters and appendices in this edition cover: Australia Tribunal, International Peace Bureau, ICJ Marshall Islands cases including RMI v UK ICJ Application, Nuclear Abolition, Nuclear Free Zones, Nuremberg Principles, International Criminal Court, Move the Nuclear Weapons Money (disinvestment), Treaty for the Prohibition of Nuclear Weapons, Contesting Nuclearism, various nuclear weapons treaties, Russell-Einstein Manifesto. Contributors include: Colin Archer, Richard Falk, Nick Grief, David Krieger, and Sean MacBride. The book Foreword is by Richard Falk and David Krieger. Get it here!