Book Of The Year

The CRS Book of the Year Prize honours research that is contemporary, exceptional and world leading, and which provides an invaluable contribution to the literature on conflict and peace studies, very broadly defined.  It is an annual prize selected from nominations made by leading authorities around the world in the areas of conflict and/or peace studies.

How to Nominate a Book for the CRS Book Prize

The annual book prize nomination period opens each year in October. A call for nominations is sent out in October via email to all CRS members, the board, as well as a variety of leading scholars and institutions from around the world. The deadline for making nominations is the last day in November.  Winners are normally selected by end of January.  However, you can make nominations outside of the nomination time-frame window by emailing Andrew Thomson (a.f.thomson@qub.ac.uk).

Winner of 2020 Conflict Research Society Book of the Year Prize 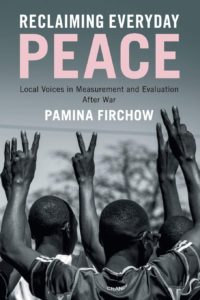 Reclaiming Everyday Peace addresses the effectiveness and impact of local level interventions on communities affected by war. Using an innovative methodology to generate participatory numbers, Pamina Firchow finds that communities saturated with external interventions after war do not have substantive higher levels of peacefulness according to community-defined indicators of peace than those with lower levels of interventions. These findings suggest that current international peacebuilding efforts are not very effective at achieving peace by local standards because disproportionate attention is paid to reconstruction, governance and development assistance with little attention paid to community ties and healing. Firchow argues that a more bottom up approach to measuring the effectiveness of peacebuilding is required. By finding ways to effectively communicate local community needs and priorities to the international community, efforts to create an atmosphere for an enduring peace are possible.

The prize committee received over 50 nominations from conflict/peace researchers, institutions, practitioners and publishers from around the world. The committee chose the winning title out of 6 short-listed books based on criteria such as how well the book demonstrates a significant contribution to conflict/peace studies, impact factor, methodological rigour, robustness and credibility of the findings, the extent to which it is interdisciplinary, quality of writing and presentation.

Judges on the Prize Committee praised Reclaiming Everyday Peace: Local Voices in Measurement and Evaluation After War for its “elegant and simple solution” to the complex problems associated with evaluating everyday peace. The judges highlighted that “this book offers a deep, nuanced treatment of peace as concept, and as lived experience”.  It offered a very “creative and systematic approach” with extensive fieldwork and “methodological innovation”, incorporating consideration of “players in different levels of peacebuilding efforts”. The judges also praised this book for its “radical” policy relevance: “If we accept what Firchow is saying, then the implication is that the existing ‘liberal’ peacebuilding paradigm needs to be flipped inside-out.

This title was elected out of a total of six finalists. These were excellent contenders for the prize and the judges also praised the excellent quality of research in all of the shortlisted books.  Our congratulations are extended to the following running up shortlisted titles (in no particular order):

The winner of this year’s CRS Book Prize, Pamina Firchow, is invited to provide a keynote talk to CRS members on a CRS online event on 24th September, 3:00pm to 4:30pm. Sign up for the talk here.

2013
Steven Pinker (2011) The Better Angels of Our Nature: The Decline of Violence in History and its Causes. New York: Penguin Books.

2012
John Paul Lederach and Angie Lederach (2010) When Blood and Bones Cry Out: Journeys through the Soundscape of Healing and Reconciliation. Oxford: Oxford University Press.