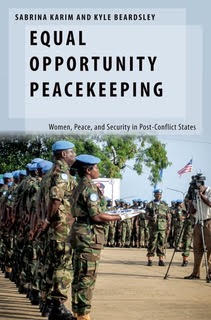 The prize committee received over 50 nominations from conflict/peace researchers, institutions, practitioners and publishers from around the world. The committee chose the winning title out of 3 short-listed books based on criteria such as how well the book demonstrates a significant contribution to conflict/peace studies, impact factor, methodological rigour, robustness and credibility of the findings, the extent to which it is interdisciplinary, quality of writing and presentation. The committee also prioritised first time book authors.

The prize committee described Equal Opportunity Peacekeeping as a “tour de force” and praised this timely publication for its “really important contributions to the fields of peacekeeping, gender studies and to those interested in organisational efficacy in any field of work.” This book provides a conclusive study in these areas by “drawing on surveys, interviews, cross-national data and field experiments”. The committee also noted “its application of multiple methods,” arguing that “the triangulation of quantitative and qualitative research should make the conclusions and recommendations extremely hard to ignore.” The judges agreed that this book goes far beyond fulfilling the criteria for the CRS book prize. It is a deserved winner for its outstanding scholarship.

This year’s prize committee chose this year’s winner out of three excellent books. This year it was a very difficult decision due to the quality of all three of the finalist entries. Our congratulations are extended to the following running up titles (in no particular order):

The prize winners (Sabrina Karim and Kyle Beardsley) are invited to the CRS annual conference to receive their prize and to provide a short presentation on their work at the CRS conference at Pembroke College, Oxford, September 18th-19th, 2017.

For more information on the CRS Book of the Year Prize click here.