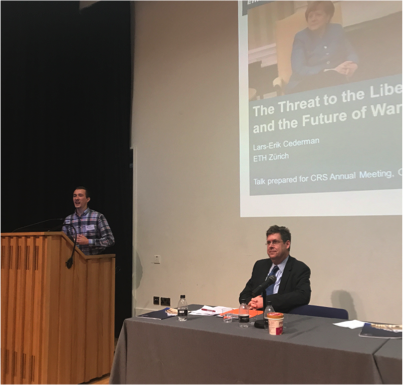 Threats to the Liberal International Order are resulting in an upward spike in armed conflicts and threaten a revival of ethnic exclusion, civil war, and nuclear instability, argued Lars Erik Cederman, in his keynote speech to the 2017 CRS Annual Conference. He compared the liberal international order to a garden in a jungle: it needs vigorous action to defend its achievements. Using his own research results, he suggested the link that Gurr drew between minorities at risk and the threat of armed conflict still holds. After a long period in which armed violence has been falling, minority protection has been improving and democratic governance has been spreading, these trends have started to go into reverse. The most recent data suggests a rise in discrimination and exclusion, a higher level of ethnic conflict, a spike in the armed conflict data, coming at the same time as the return to nuclear crises. The rise in populism and the adoption of exclusionary agendas in the White House threatens to erode the liberal world order. Drawing on his own personal reflections, Cederman suggested that a vigorous reform and defence of the liberal order, and reassertion of the values of cooperation, democratic participation, tolerance and pluralism, was vital to avoid the risks this turn to illiberalism might portend.

Cederman’s keynote was the climax of the CRS Conference, on the theme: ‘Ending Conflicts in Turbulent Times: Exploring the Conflict, Peace and Violence Nexus’. The conference was hosted by the Changing Character of War Programme with the support of the Centre for International Studies at Oxford University. More than 160 participants attended – the highest turnout ever to a CRS conference – with delegates arriving from all over the world.

The conference started with a plenary in which Oxford academics Anke Hoeffler, Richard Caplan, and Peter Wilson reflected thoughtfully on their approaches to our field, prompted by questions from Andrea Ruggieri.

Researchers offered excellent presentations of their ongoing research in five parallel sessions, with four or five presenters in each session. Panels spanned the field, covering among other topics:  civil and international conflicts, interventions, peacekeeping, civilian protection, nonviolence, norms and values, gender and conflict, crime and conflict, religious conflict, dialogue and mediation, the Colombian conflict, peacebuilding and peacemaking (see the conference programme for the full list of sessions).

Chris Mitchell took us back to the early days of the Society with an endearing video tribute to Tony de Reuck, a founder of the CRS, who passed away earlier this year.

The medieval milieu of Pembroke college provided a memorable backdrop, and participants enjoyed a fine dinner in the College Hall.

CRS thanks all the participants for their contributions, and is grateful to its partners in Oxford University, to the staff at Pembroke College, Oxford, and to the organizers and programme convenors and volunteers for all their work towards a successful conference.

Details of the 2018 CRS conference to be announced soon.

The Conflict Research Society is closely monitoring the situation regarding the recent COVID-19 outbreak. The health and safety of CRSRead More